Life has this way of making me get sidetracked easily. When I started this site, I had every intention of digging deeper into my BURCHETT legacy and hopefully piecing together missing pieces. Well, as I said, life just put that on hold for over a year now.

However, I recently got an update on my Ancestry DNA and, like before it’s not overly different, but enough that really using it to have a true understanding of my heritage seems impossible. Case in point: The last update seemed like Scotland dominated the update for everyone. While that made sense, in a fashion, it seems to be nothing more than something similar to marketing. What I mean is that unless a vastly huge percent of the human population submitted for DNA results the Ancestry results will be nothing more than an increase in DNA kits sold to certain markets, ergo, a higher percentage in that area in everyone’s results. How is that useful?

I don’t see the benefit of the test any longer. While a certain percentage of my results has stayed consistent, others (which I have some documented proof of ancestry) has radically changed. Scottish and Norwegian heritage are prime examples.

Initially my Scot heritage was pretty low, then, with the update it shot through the roof, now with next update, it has once again been knocked pretty low.  Similarly, my Norwegian heritage went from being fair to disappearing and now has come back again, higher than it was originally. The up and down with my English heritage is bewildering also.

So, I am not sure I can really get a true feeling of what my heritage really is. I can make a fairly educated guess, but I would love to be able to see something that confirms it. My Y-DNA test sheds some light, but again, nothing solid. But at least it seems to be solid enough to not be swayed by marketing type structuring and has a better shot at steering me in the right direction. 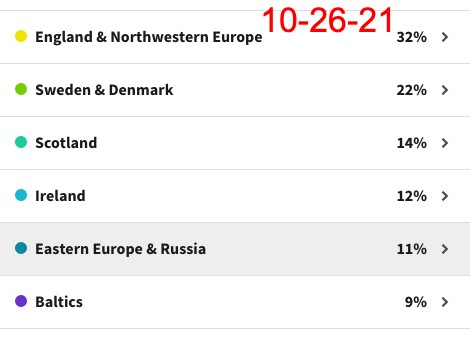